This weekend was busy and the highlight of it all was Christopher graduating from the Music City Young Marines boot camp. I’ve blogged about his training during training week 7, and now the 13 weeks of recruit training is over. Christopher is now a Young Marine.

The recruit training aspect was grueling, especially if you’re unaccustomed to total strangers yelling in your face and being forced to run a mile to three miles. The training is so hard that for some reason the Music City Young Marine platoon is considered the grunts (infantry) by others in the nation wide program. In particular, some of the other Tennessee units look at that as an insult while others look at it as a compliment. I personally look at it as a compliment. After all, isn’t the Marine Corps known for its hard-charging infantry? 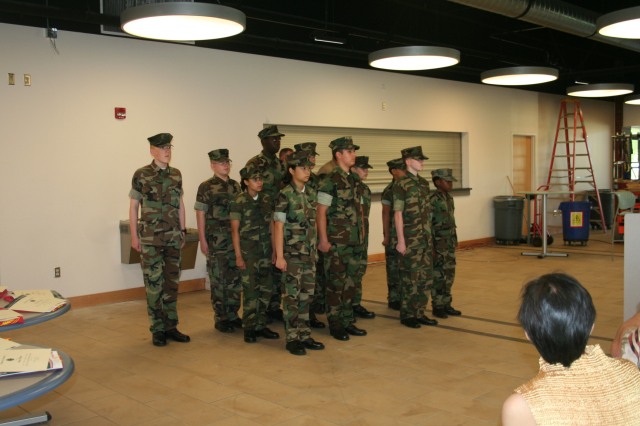 This is what highly motivated and truly dedicated looks like. The spring Music City Young Marines recruit platoon graduation.

Chris’ platoon drills hard and PTs (physical training) harder. Everyone 12 and older, regardless of sex, is expected to drill with a 9lbs real steel M1 Garand rifle, where other units use the pot metal and wooden toy rifles that young kids play with. Those under 12 are issued those toy rifles due of their age and physical abilities. I know 9 pounds doesn’t sound like much, but drill for an hour with one while performing the manual of arms and your arms tend to tire quickly. Chris doesn’t have that problem. He owns a Russian WWII M91/30 Mosin-Nagant rifle that’s only 7oz lighter and he drills with that for several hours a week. He’s very motivated. 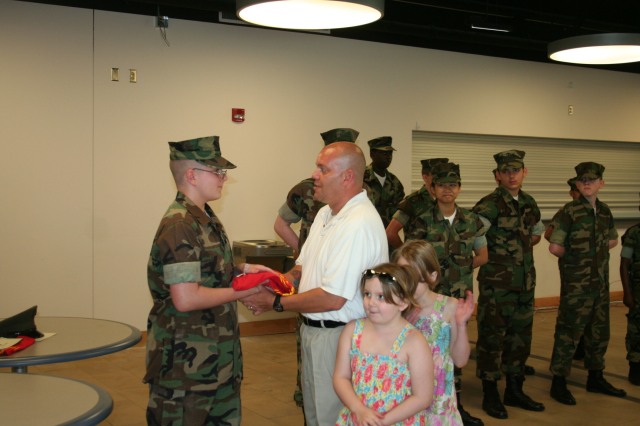 The parents were the ones presenting the accolades to the graduates. Sarah and Emily insisted on being up there with me. How could I say no?

With that aside, saying Chris was excited the morning of graduation is a serious understatement. He was up and dressed by 0630 (6:30AM) that day and urging us to get out of bed. He was like a kid at Christmas. We were like tired parents at Christmas. lol 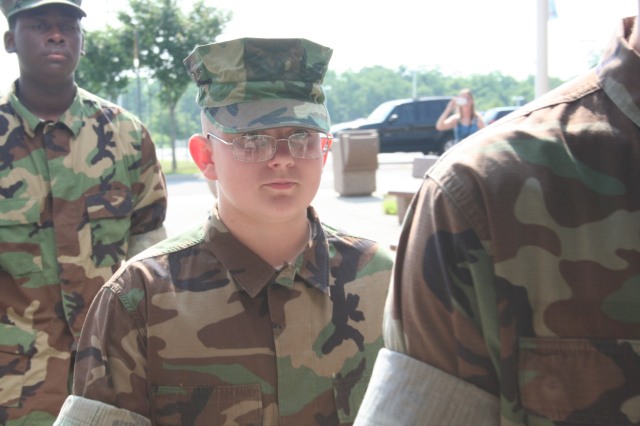 This is his new happy face.

Now, the ceremony lasted two hours and each of the Young Marines and their family members were called up one at a time and presented with the certificate of completion, their ribbons for completion and fire safety awareness (some received ribbons for academic and sports recognition as well), their Young Marines PT t-shirt, guidebook for Young Marines, name and unit name tapes, and a pair of boot bands. The boot bands are to blouse their boots Marine Corps style upon completion. It, like unbottoning your collar, is a right of passage, which these young men and women have earned.

With newly bloused boots, the pride kicks in overdrive.

And each of them earned their accolades. The platoon was 28 when they started 13 weeks ago and they graduated 12. There would have been 13, but one private didn’t show up for graduation so if he wants to be a Young Marine, he’ll have to begin at training week 1 in the fall. I feel badly for that young man, but he simply disappeared the week before graduation and no emails or phone calls were returned to the staff.

Understand that Christopher and three others had a distinction that the other two-thirds of the platoon didn’t have; Christopher McKinney, Christopher Cooke, Ne-ne Yutakom, and Lauren Smith were meritoriously promoted to Private First Class. In order to get that promotion, a recruit had to score 100% on their written exams. Let me say that I couldn’t breath when they tapped Chris along with the three to move out of formation. I knew instinctively what was happening and at that moment, I’d forgotten how to breathe.

When they called them to appear before the commanding officer, I began to cry. Yeah, I cried. The last time I cried like that was the day Chris was born. I couldn’t help it and even my oldest sister-in-law, standing at the far back of the room said, “Oh no. Jason’s not going to make it. Yep. He’s crying.” Indeed, there I was, snapping pictures with tears streaming down my face. Completing the course made me proud enough. Knowing he’d been promoted to a higher grade because of his efforts made me walk on air. 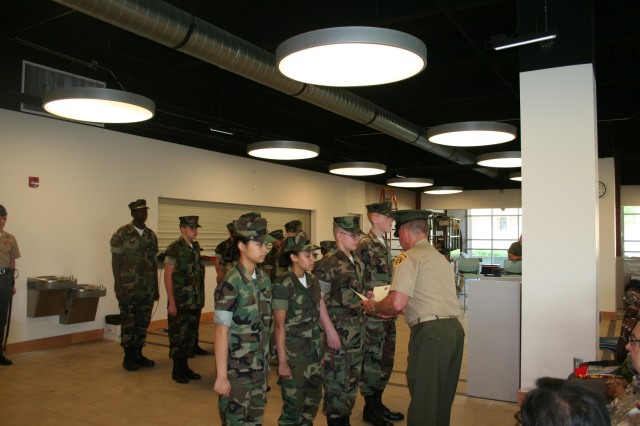 Now the hard stuff isn’t over for these Young Marines. In July they’ll be traveling to Marine Corps Recruit Depot Parris Island for a week to experience what it means to be a real Marine Corps recruit. 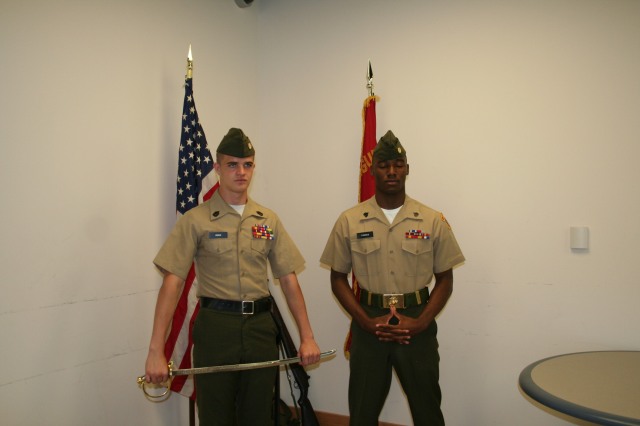 I’ve written a blog post detailing that trip and I’m begging (yes, I am begging) for everyone that reads this to please spread the word about my fundraising to get them there. This is an incredible chance for these kids to further their courage and commitment and to build character in ways that few experience. Only a handful of the Young Marines have been to the Island and that was on last year’s trip. The majority have not and Chris and his platoon are in that majority. Please, please, please from the bottom of my heart, please help them. 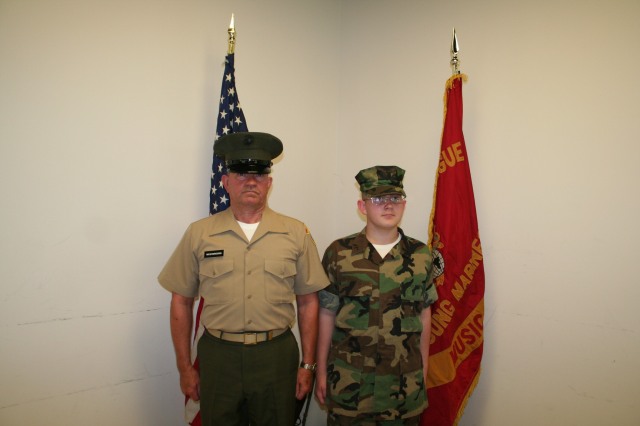 I’ve set up a donation button and post for those of you motivated to donate to them and 100% of what you give will go to their expenses to get there. I have some modest swag as an incentive for those that wish to give and I hope you do. Thank you all for taking the time that you have to read this. 🙂

My favorite photo. The platoon gathered together, waiting to be called to formation. Never before have I been so proud of a group of people.

I'm a word slinging, werewolf loving, zombie wrangling, scare master author, husband and father of three. When I'm not writing, I'm blathering nonsense to the world or taking orders from the family. You have my thanks for stopping by and I hope you enjoy the madness and mayhem! Stay delicious, my living peeps!
View all posts by Jason McKinney →
This entry was posted in Life Happenings!, Misc. and tagged Christopher McKinney, Jason McKinney's son, Music City Young Marines, Spring graduation platoon, Young Marines, Young Marines of the Marine Corps League. Bookmark the permalink.